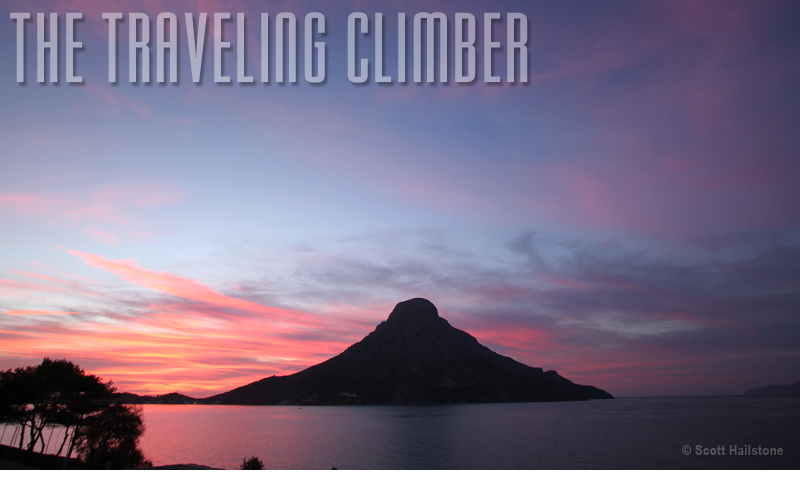 We have covered a lot in the last year about rock climbing, but that is only one small piece of the story of the places we as climbers and travelers visit.

So we thought we would trawl through the photo archives and show you a different side to a location, that with a quick climbing trip you might not have spotted yourself.

Our first place is of course Kalymnos. How could it not be, as we have spent so much time here in the last few years … (clocking up almost a year and a half!) … and it still surprises us, we are still uncovering it’s many secrets. 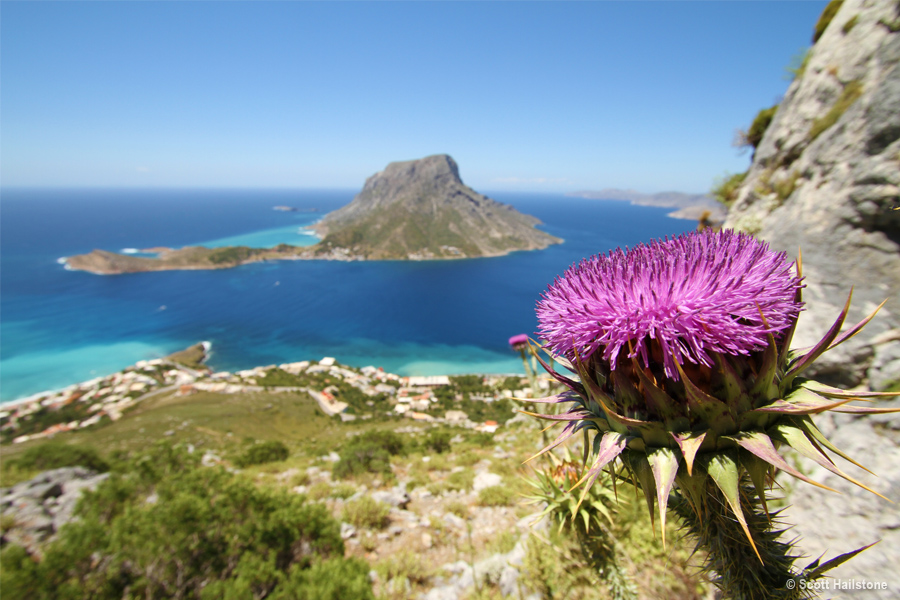 In spring Kalymnos is green! It’s hard to believe when you visit in prime climbing season September through November, when a large portion of the island looks like a barren rocky desert but after the rains of winter the island is blooming with wild flowers. Yep, those brown swaying pincushions that even the goats won’t touch are brilliant purple puff balls in April! 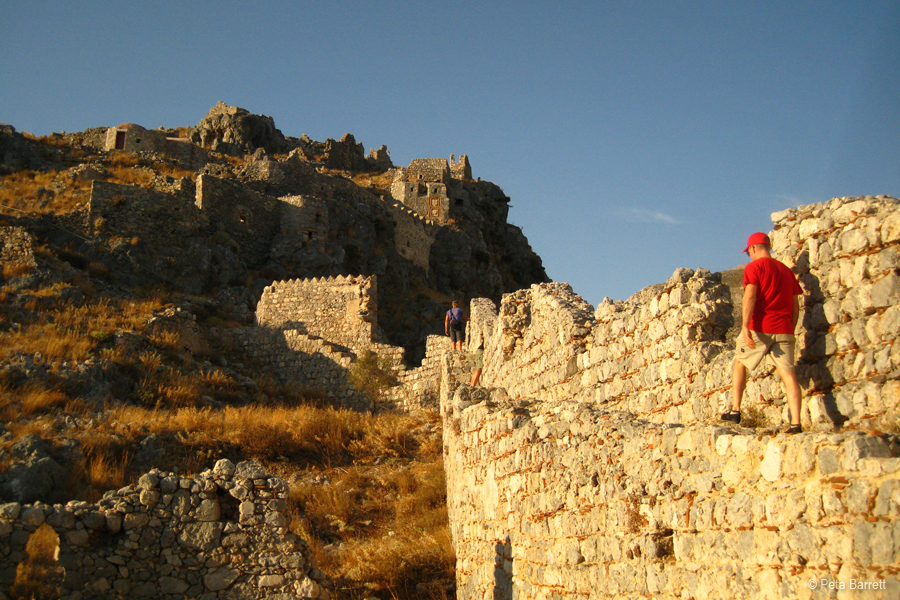 The hills have eyes! The Kalymnian landscape is littered with historical footnotes. It is overflowing with ancient fortresses, medieval castles and chapels.

Being at the intersection of the East and Western worlds, Kalymnos has seen it’s fair share of conflict from raiding pirates through to an Italian occupation during the the second world war. The people of Kalymnos have always needed a safe place to head to for shelter and defense.

The castle Chora is a fine example of this. Rising above the capital of Pothia, it’s current form as seen today took shape at the end of the 14th century and was in use for well on 4oo years as a place of defense. It hosts ten individual chapels that bridge this time period, which are well worth an explore, some still showing the remains of original painted murals.

Stroll it’s battlements at the end of a days climbing to avoid the heat of the day … that’s if you can navigate the small, narrow and winding alleyways that lead to the base of the castle stairs :). 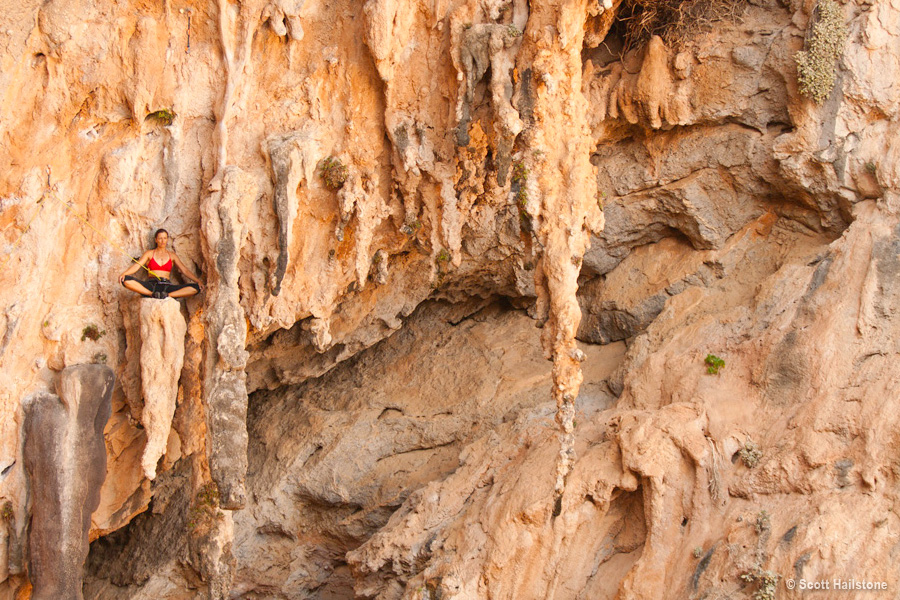 Ok it really is all about the climbing … until after fighting your way through a strenuous Kalymnian tufa pump fest you find a little escape pod, an eye of the storm. Sitting in one of these no hands, often no feet rest positions, time disappears and it’s suddenly all about the resting. In normal sport climbing you smash it out to the top, have a quick look at the view, lower down and start all over again. The long Kalymnian routes however, give themselves over to long introspective pauses on the wall. Time disappears, have you been resting for 3 mins or 30? Has your belayer fallen asleep? Do you really want to leave your perch, it’s soooooo meditative …ooohmmmm ….. 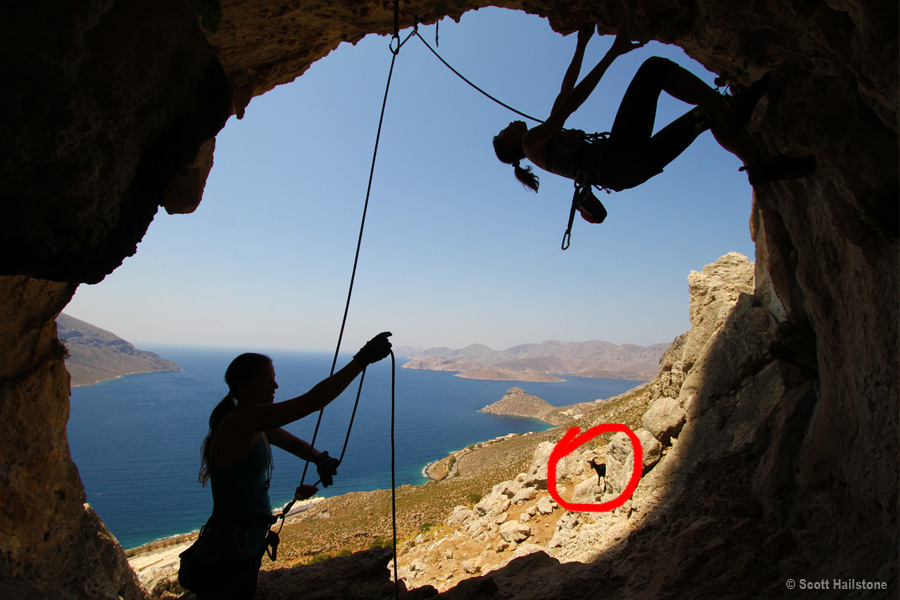 There’s one in every photo! There maybe no sharks in the ocean but there are roving packs of them trotting around the island. They are not interested in you in particular, unless you are holding a banana peel, but step away from an open climbing bag at any given crag and it is open season on your lunch. It would not be unusual to see four or five of these guys, head down in a backpack like a family of hyenas in the belly of a dead zebra. There is a particularly well horned, brunette nanny goat that likes to hang out on the corner of the Grotta so she can survey for an open backpack at three different sectors without moving! Naughty goat! 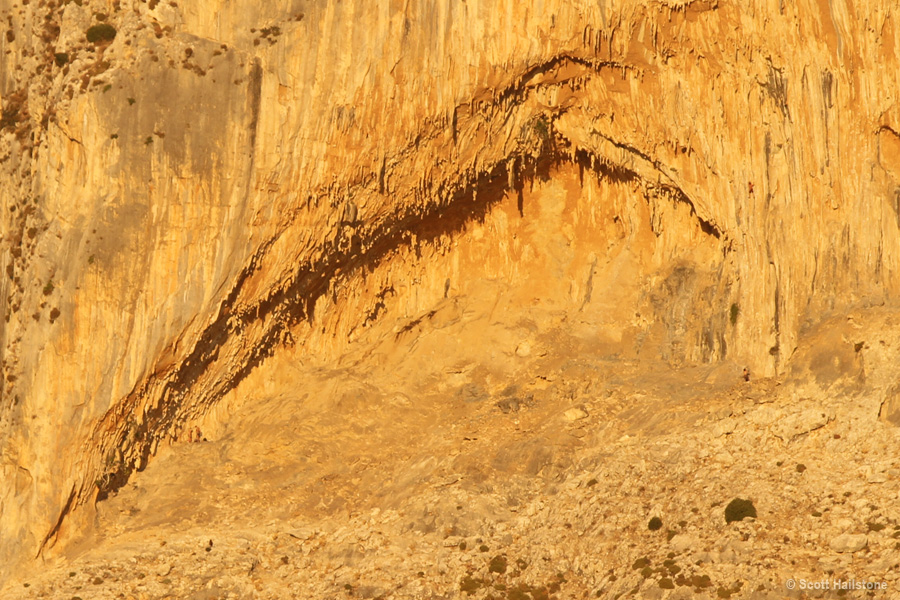 Speaking of the Grande Grotta, seen from Telendos at the end of the day it is an upside down golden forest of stalactites and tufa blobs. I never get sick of looking at it whether I am climbing in it or not, it draws the eye from all directions. 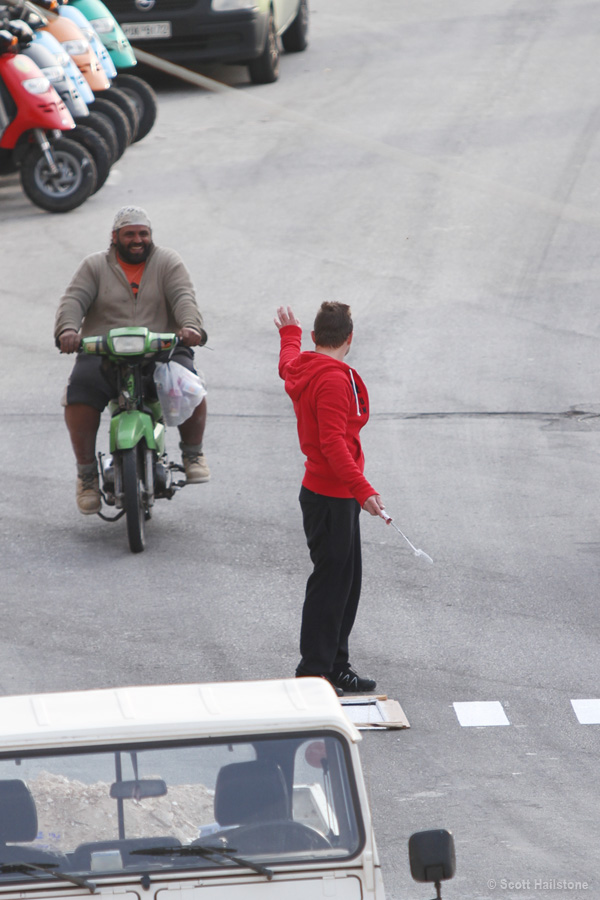 Costa, the owner of the local cafe Sofranos, not only makes good coffee but also takes his life in his hands repainting the crossing marks on the road to the outdoor area, at the same time as doing a bit of friendly traffic direction. Everyone has time for a chat on Kalymnos over a coffee frappe. 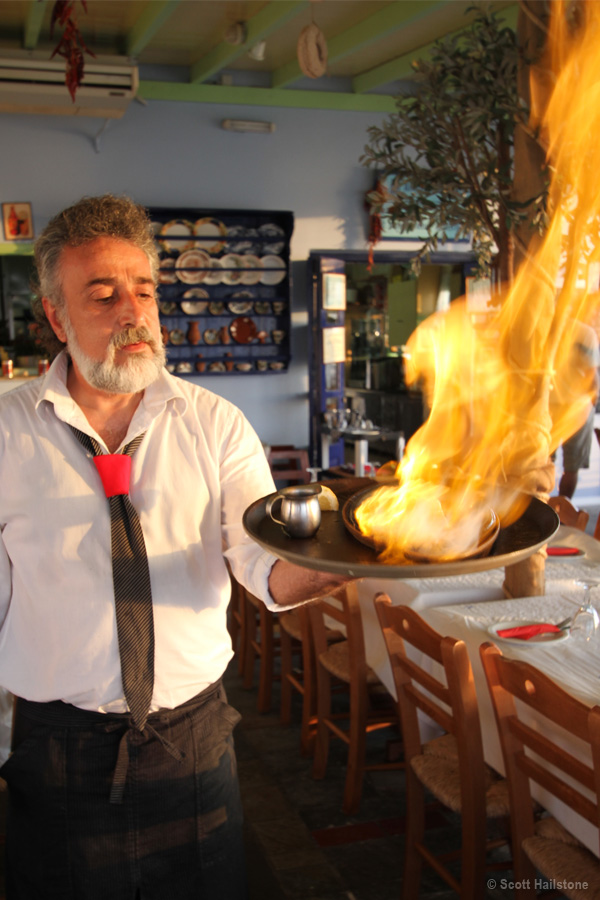 Hey don’t burn the … ok burn it a little bit then. One of the local waiters ignites a plate of cheese saganaki, listed on the menu in an understated but curiosity inducing english title of “Cheese on Fire”. A slab of local cheese, splashed in spirits (ouzo?), ignited with a flourish and then doused with fresh lemon juice … and that is just a starter!

The traveling climbers are running climbing courses in Kalymnos where we can introduce you to all of these amazing things. Are you keen on heading to Kalymnos to climb but need a hand making it happen? Are you new to climbing and want to travel but just lack the experience? Are you an experienced climber but have just been out of the game for a bit and need a bit of inspiration? We can do all the thinking and hard work for you. You just need to turn up and climb the best routes on the island!

We are running a 11 day climbing trip to Kalymnos on September 6th – 18th 2015. Includes all climbing and professional coaching, all transfers on the island, accommodation, breakfasts and dinners.

The prices are in $A, so depending on where you are coming from, you could be in for a bargain trip based on the exchange rate!!!

Kalymnos 2014 marks my third trip with Peta and Scott and I can’t
really say enough about them as guides.  From the meticulous planning
that goes into each day, to the coaching and support given to every
climber, to the many hours spent just making sure everyone has a great
time, Peta and Scott make every day of every trip memorable.

I’ll (reluctantly) leave Kalymnos as a stronger climber physically,
mentally and technically and with a swag of great memories and
unexpected achievements. Can’t recommend this trip highly enough!

Come and let us show you Kalymnos, the way we see it!