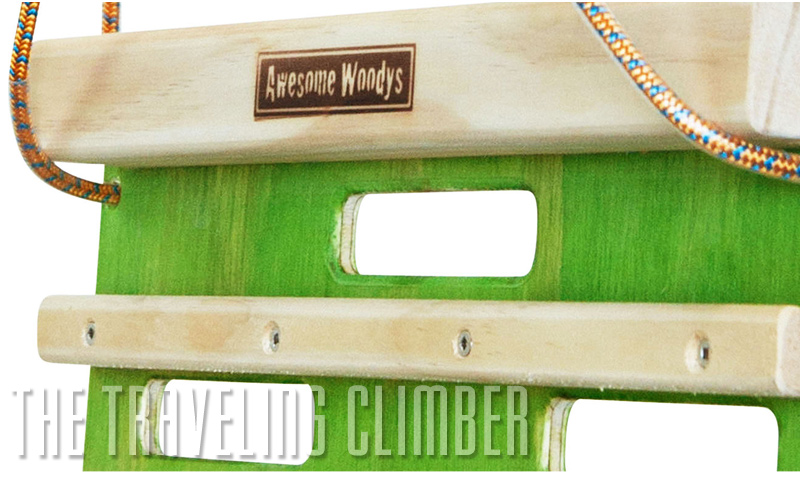 After our first big trip (which lasted 16 months) we came home to the realisation that a long time climbing on the road (mainly tufa limestone) and not hitting up the climbing gyms could actually leave you weaker than when you started off! Technically and strength wise we had made some great gains but in the finger strength department, especially crimping, we were going backwards. We just figured that you could go climbing heaps and that would just make you automatically stronger … apparently not

We jumped back on the hangboards back home and got quite a bit back but we knew heading off again we would be in the same boat once again several months down the track.

Traveling around a fair bit and being generally overweight in the baggage department already, we needed some sort of portable hangboard solution that was lightweight and didn’t need to be nailed to a wall.

We already had a set of Metolius Rock Rings that we had lying around, but I had never really had much luck with these little guys. The independant swinging nature of the two pieces always seemed a little non specific to actual climbing, the pockets really don’t lend themselves to proper crimp training and they are pretty heavy with a set weighing in at around 2 kgs. In the past for some reason I just found myself swinging on them and blowing out my shoulders trying to do chin ups competitions.

Back home in Australia our good friend Ross Ferguson, a great climber, climbing wall and climbing training tool developer and builder, had been busily at work on a project that was the answer to our first world, finger strength problems.

Ross’s company Awesome Woodys (www.awesomewoodys.com.au) has been quietly beavering away on a growing range of wooden climbing tools and products for the last several years. He created a portable hangboard (the Cliff board) which weights in at just under 1 kg and is about the size of a large laptop screen. Not to rest on his laurels, he then turned around and out did himself with the Cliff Board Mini, which at around half a kilogram and size of a smaller laptop screen was just the ticket for our requirements.

Initially when I first saw the Cliff Board I thought you were going to have the same problems as the Rock Rings, as it was only connected by one anchor point, it was going to swing around uncontrollably. Not the case, as I quickly found out, Ross had worked some trickery with the prusik lines that meant as you weight it up, grooves in the board steady the board and lock it into a stable position that means you can hang from it with both hands without rotation or one hand if you hold it centrally. 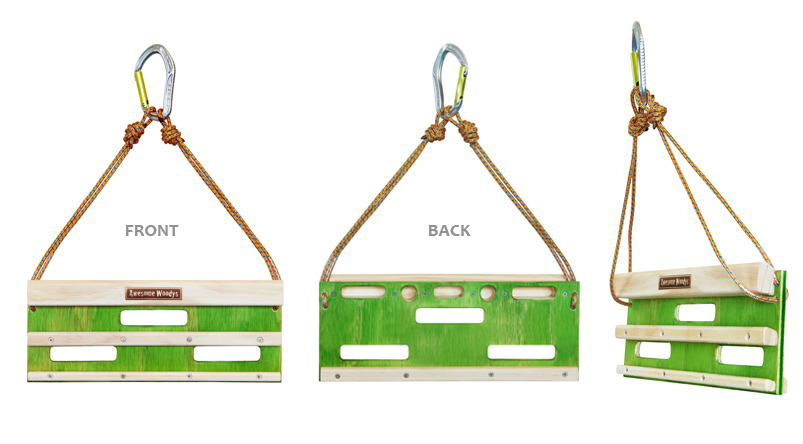 Finding places to hang it on the road, in hotels or apartments is always a little tricky but no less than an ordinary hangboard that you would have to drill into the wall. We found the sunshade framework of our apartment in Kalymnos was perfect for this and in other places finding a park with monkey bars or similar, was always a good option.

At the actual crag however is where the Cliff board comes into it’s own! Because it is so light, it is easy to chuck it in or attach to a backpack and walk it to the crag. At the crag, depending on the layout you can either hang it from a tree, the first bolt of a route or even attach it to your climbing rope via a prusik.

The last option was particularly useful when we were in the New River Gorge, West Virginia earlier this year. The New has a tradition of really, really high first bolts, which leaves most locals wandering around with the longest paint poles and stick clips they can find, perfect for stick clipping and hanging your portable hangboard from. It is also notorious for sandbaggery in the grading, crimpiness and general lack of good/any warmup routes. This made it the perfect location to trial a hangboard as a crag warmup and fingers strength recruitment tool prior to doing your warmup/project (often unexpectly the same route

Results were two thumbs up. 5-10 mins of warmup stretching and progressive hanging have made a marked result in our ability to start climbing harder, faster at the crag and a general overall improvement in finger strength and lack of tendon tweeks.

The board also has a range of single and multi digit pockets you can hang from as well but from our point of view the three crimp edges on the front face are alone worth their extremely light weight in gold as a traveling finger strength improvement tool. Good work Ross, keen to see what else you come up with in the future.

*** Just in time for Xmas, Pinnacle Sports our main sponsor and all round nice guys, have just released a list of Xmas sale specials on their online shop, including the Awesome Woody Cliff Board and Cliff Board Mini. This is a great deal if you travel and climb or just like a good hang at the crag before you get to work. Thanks guys!! *** 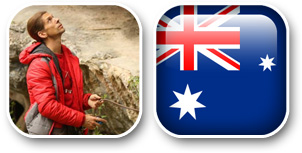 Scott is a traveling climber who prefers burly moves on big jugs but does appreciate a nice crimpy move every now and then. 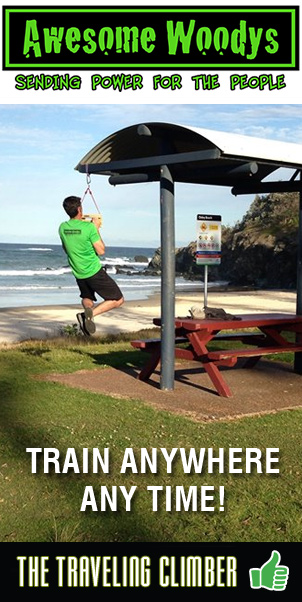